A happy ending depends on when you stop the story.

Allow yourself and your partner to be fluid not fixed

Different perspectives: what does my partner think?

A happy ending depends on when you stop the story.

A happy ending depends on when you stop the story…. I am talking with a couple who have stayed together through good times and bad, including the death of one of their children.

“We just knew there were better times coming because there had been good times before. So, I hung on for dear life and trusted and and knew that eventually I –  and we – would feel better.”

“Yes”, adds her husband, “If we had bailed out then, I would have thought we had had a bad relationship. But I’ve seen my wife go through the most awful grief and she pulled through and I admire her so much.  Much more than before. Infinitely more! She is tough. She was an inspiration to deal with my own grief.  And now we are strong beyond belief.”

His wife adds, “Earlier in our relationship I would fall apart when relatively small things happened.  Now I know that I  – and we –  will always be OK because we know how to sustain ourselves no matter what is happening.”

“I really was tempted to call it quits,” he admits, “because I had a pretty shallow idea about relationships back then. Being committed for the long haul, no matter what really is a glorious thing.” 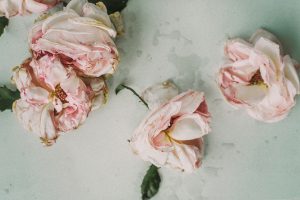 These dying pink roses represent a couple who have stayed together through good times and bad, including the death of one of their children. They can say without a doubt that a happy ending depends on when you stop the story.

This couple is an inspiration. They have found depth and truth in sorrow and suffering. James Hollis explains more about how adversity deepens us in “Swampland of the Soul: New Life in Dismal Places”.

Relationship as initiation. The many transitions of relationship. Where is the happy ending here?

I know another couple, Sharon and Gerard,  who recently celebrated their 25th wedding anniversary. Their story is extraordinary, too. There are many points in those 25 years, and before, where they could have stopped their story.  But they didn’t. This is what I wrote for them, to honour their renewal of vows.

“Long -term committed relationships are, frankly, hard. Everyone knows this. So everyone, including myself, is curious about a love that evolves through decades of dedication. I’m very curious about a love and a commitment that is an initiation, an invitation to the depths.

When we’re going somewhere sacred, initiations require that we cross the threshold from one world or state of being to the next. I have known Sharon and Gerard since about 2009, and have been able to witness the most recent years of their journey together. They have had many initiations and many threshold-crossings. They have both had many occasions to give something up, to make sacrifices – sacrifice meaning to make holy, or sacred, in a way that has most of us quaking in our boots.  And quake we should. Because that kind of threshold-crossing has taken them out of one world-view or persona to another, several times over.

We as the observers are able to witness the grand arc of their life together and wonder and marvel. We see that Sharon and Gerard’s love story is the thing of myth, almost too big for human lives to endure. Yet hour by hour, they have suffered these initiations together – and believe me, initiations involve suffering. They are truly on this journey together, for better, for worse.”

One of the old Jewish mystics taught that there are 2 kinds of joy. One is the joy of the ego when something goes well, like I described in the happiness post.  We are pleased with ourselves. The second is a deep joy of the soul.

This Rabbi illustrated soul-joy by saying it is like a man whose house has burned down. So, he rebuilds it, brick by brick with his own hands, his heart full of joy. This is the kind of happiness or joy experienced by these couples. They have earned it. It is not dependent upon good fortune. It is not going to blow away in the next wind.

Both of these couples illustrate for us that happiness was not their pursuit, but happiness arises as a consequence of endurance and dedication to each other.

“If it is not alright, it not yet the end”

There is a wonderful over-the-top movie titled “The best exotic marigold hotel in the world”. Expressed in different ways, the theme is that “Everything will be all right in the end. If it’s not all right, it is not yet the end”……. Patel, Hotel Manager, The Best Exotic Marigold Hotel”.

This phrase is not original to the movie, but is borrowed from the Brazillian writer Fernando Sabino, who said the same thing –  “In the end, everything will be ok. If it’s not ok, it’s not yet the end.” Think about what this might mean, and if it is true for you in your relationship.  I’d love to hear your comments.

Here is a story to further your contemplation in happy endings.

There is a Taoist story of an old farmer who had worked his crops for many years. One day his horse ran away. Upon hearing the news, his neighbours came to visit. “Such bad luck,” they said sympathetically. “May be,” the farmer replied.

The next morning the horse returned, bringing with it three other wild horses. “How wonderful,” the neighbours exclaimed. “May be,” replied the old man.

The following day, his son tried to ride one of the untamed horses, was thrown, and broke his leg. The neighbours again came to offer their sympathy on his misfortune. “May be,” answered the farmer.

The day after, military officials came to the village to draft young men into the army. Seeing that the son’s leg was broken, they passed him by. The neighbours congratulated the farmer on how well things had turned out. “May be,” said the farmer.

The drought will be broken by a flood – is the flood the happy ending?

This sentiment of the Zen story is very true in relationships. There is no such thing as unalloyed happiness. But at some point, you are likely to be very happy. Or she is happy and you are unhappy.  Or you are both unhappy. But happiness is not the goal. Provided there are no issues such as domestic violence, major mental health issues or addictions, if you keep doing your best, you and your relationship will evolve through many stages. Doing your best means taking responsibility for your own mistakes, and learning from them, and learning to bear suffering with equanimity.  It is like living through a drought – the drought will, one day, be broken by a flood – especially if you live in Australia.

What you endure together today provides the firm foundation for a tomorrow that you cannot even imagine.

This Insight is related to “Is happiness aiming too low?“

This spiral staircase represents the many different levels on which we might address a problem. What might not be happiness on one level becomes happiness on the next. Through all stages of life, relationships and the need to communicate are the fabric of our lives. How to Kill a Relationship